What Is The Role Of Words, Language, The Internet?

Brooke sent in so many wonderful questions that we are still continuing this one interview with her. Don’t be hesitant to send in your own.

Brooke #10: What is the role of Words? As a Writer and Existential Thinker, I often feel so limited by words, but on the other hand, I am also liberated by their ability to guide Consciousness when harnessed correctly.

Oh, my Holy Spirit! What words will You choose to answer Brooke’s thoughtful question?

“My God, Linda Layli, Layli Linda! (He is singing this) I don’t even have any words to tell Brooke how she has assisted this process that you and I have been conducting with these Random Questions We have been working with, ever since you figured out what to do with this dubious honor that cropped up, halfway through your life.

Words are the only currency between Consciousnesses. “Meaning” would say it simply, but how in the world is meaning conveyed without some exchange tool to deliver individual thoughts? Animals don’t have this sort of communication, sophisticated as their thought transmissions may be. Past and future cannot be dealt with when there is no language. Only the most basic of present day, immediate needs.

Actually, you are in a great position to contemplate the power and effect of words! You speak only English, and yet, that’s a foreign language in Asia. Many people here in Laos speak multiple languages, simply for their own employment’s sake. But, that requires an expensive education and careful pronunciation. The minute one has no common language, particularly with babies and animals, then everything, pretty much goes out the window. Written instructions and directions are gobbledegook if you don’t understand them. Some primitive societies don’t get very far, if they cannot write things down. Words are the basis of thought and communication within every society. They capture the elusive moment and that forms a record of past, present and future. Words become a form of discipline for the mind and all thought depends upon them.

Even the power to serve as a Creator rests upon one’s power to form a cohesive idea, which eventually is realized in some tangible way. Either by construction or expression; making it possible for another individual to deal personally with it. So, words constitute the Reality of every Creative Command. This is a very central position in which all reality depends upon the role of words. 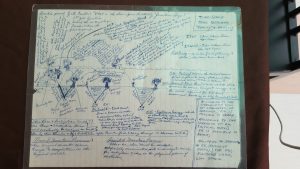 In your depiction of “The Time-Space Relativity Quantum Leap” …. The Time-Space Span Between “Reality” and REALITY.” the critical stage of Put-On-Paper” POP, comes immediately after the Idea Inception. This is the Role of Words!”

Brooke #11: “Internet! What has it done to our consciousness? Does it have a consciousness of its own? Is there a “next internet?” Does it go further?” Oh my Holy Spirit! I would be hard-pressed to do without the Internet now, but we started talking in 1980, and I didn’t have it then. What is Your take on the whole matter?

“Well, it’s an interesting phenomenon and is the reason that Peace is spreading instead of war. Only the internet can provide Earthlings with the impartial information and proof of claims and evidences galore, which humans need to make their own conclusions about life and faith and each other. Particularly, to humanize Beings from other countries and to allow friendship to spring up, instead of suspicion and hatred.

This is the way that We have wanted you to develop and to get along with your own kind. Many, many other potentials could have come along but the Information Age established itself as soon as computers were developed and became affordable to the common man. The future is brighter and brighter, because it makes lying and ignorance a thing of the past.”

Does the Internet have a consciousness of its own?

“Not really. There’s always a human in the mix somewhere. It is as ephemeral as the air, or electricity to provide the wi-fi that it is now dependent upon. It will, inevitably, develop, just as Earth’s other dependable foundations have come along. Think of everything you now take for granted: from transportation, to building design, to communication through gadgets in your hand. But, man holds the secret to that course. Not the internet!”

Linda is a solo around the world traveler, having slowly explored the world's two hemispheres. A third trip around the equator has just begun, planned to last at least four years. After living for a year in the spiritual and beautiful town of Santa Fe, New Mexico, she has transferred to the beautiful and spiritual town of San Miguel de Allende, Mexico. Feeling honored that the mysterious Hurricane Patricia paid her a call during her first week; she is none-the-less, eternally-grateful that this "worst hurricane in human history" decided to leave the planet alone, after all.
View all posts by Linda J. Brown →
This entry was posted in Questions and Answers and tagged can we do without words?, could we do without words?, future of the internet, internet consciousness?, Time Span between "Reality" and Reality, Time-Space Relativity Quantum Leap. Bookmark the permalink.