HAVE YOU EVER FOUND SPIRIT ORBS IN ANY OF YOUR PHOTOGRAPHS?

This post was written several years ago when I was traveling in South America. I’m now in the Philippines and working with my entire blog collection on this site, writing my fifth book, “Death Never Killed Anyone!” Somehow, this post insinuated itself into present day and I decided to let it. I don’t think I have ever found spirit orbs on any of my other pictures and for a long time, I didn’t print the enlarged orb at the bottom, worrying that perhaps the Entity would  not want the exposure. Let’s try it now:

This is the view from the rooftop of the Secret Garden Hostel in Quito, Ecuador. It’s a five-story, narrow hostel, and the Reception, Kitchen, Bonfire & Dining Area, are all on the covered roof with a glorious view of the surrounding mountains and the steep , gorgeous city. We are right on the Equator, so the temperature is mild. Just a few nights ago, I snapped these shots during and after dinner and, naturally, was unaware of what else was showing up in a few of the pictures. Here’s what I discovered when I began to select my pictures. It is truly Otherworldly and Magnificent.

No, it’s not the bright stuff on the guy’s shirts…that must be reflective clothing. Look at the sphere on the left, over the head of the man in the striped shirt. It’s very bright for a spirit orb anyway and it becomes wondrous when zoomed in upon. But, it’s apparently, quite shy.

Okay, on the night sky, the Spirit Orbs are high. I think those two circles at the bottom are TV receivers. I know these pictures are small in the blog but you can enlarge them by clicking on each picture.  Orbs are very shy creatures, but they are in these pictures.

Sometimes, they might be visible in the smoke of the campfire. I know, sometimes, you’ll see them after rain, but only in the photos. not on the scene. Perhaps smoke is also a conductor? In the meantime, These flowers and the lovely night skyline of Quito are the usual result of our camerawork, with no clue of Invisible Entities…. or whatever they turn out to be.

Continuing the subject of the Spirit Orbs caught on camera above The Secret Garden Hostel in Cuenca, Ecuador.  These are two different ones but the enlarged, enhanced one gives a rare look at the beauty and light characteristics of a Spirit Orb.  Is there any doubt that this is truly an Other-Worldly Creation? 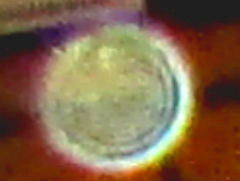 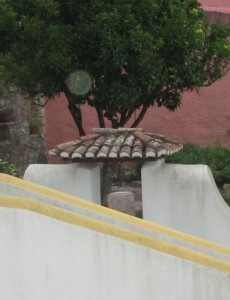 Linda is a solo around the world traveler, having slowly explored the world's two hemispheres. A third trip around the equator has just begun, planned to last at least four years. After living for a year in the spiritual and beautiful town of Santa Fe, New Mexico, she has transferred to the beautiful and spiritual town of San Miguel de Allende, Mexico. Feeling honored that the mysterious Hurricane Patricia paid her a call during her first week; she is none-the-less, eternally-grateful that this "worst hurricane in human history" decided to leave the planet alone, after all.
View all posts by Linda J. Brown →
This entry was posted in Questions and Answers. Bookmark the permalink.