This is the second post to answer questions asked by Marissa about cruelty to animals and meat-eating. See the previous post for the initial part of the answer.

Okay, that covers one-on-one animal/human relationships. Let’s look at food production. First, is meat-eating a SIN, as some religions teach?

“No, actually, actually, the human must eat meat to do justice to the body worn as a human. That is true of animals and fish as well. Not all, but many, prey upon smaller beings for their daily diet. Even insects are consumed by other living things, in large numbers and the planet needs that population control over these bugs. This is an ecological situation that is kept in good balance if the humans are doing right by their planet.

Species help each other. Bees pollinate crops, squirrels plant trees with their buried acorns. Life has a built-in food chain and the human is at the top of the three-dimensional, Earthly food chain. We won’t even get into the fact that most humans are consumed at the end of their lives to support the needs of Higher Beings, invisible and unknown to them.

Most cows and chickens and other food sources…such as fish….. 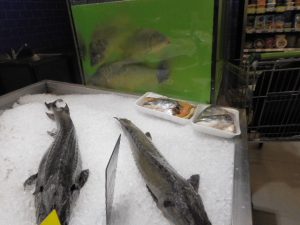 The living and the frozen dead. There’s only a thin shield between the dimensions!!!

…..are totally unaware of their ultimate destination. To grace Somebody’s Table! That fact never impinges upon them or worries them, at all. In fact, beef cattle lead ideal lives on most ranches and the slaughterhouse is not a problem. Any horror stories that make the news are simply there as sensational items. A cow, or chicken, herded to their final moments, feels no different than you might feel in a crowded airport. The boom falls, quickly and mercifully. The taste of the meat is affected, if panic is created, because fear releases toxins in the organism, which changes the flavor. So, meat packers do all that they can to make the animal’s final moments free and clear of all anxiety and fear.

These animals would never have been born, except for the demand for meat. Their lives have been pleasant and well-taken care of. As eating habits change, so will the planet’s food supply. But, it’s never a moral issue.”

Let’s analyze the food needs of various classifications. How does a whale exist on plankton? A gorilla on bamboo shoots? A horse and cow on hay and grains; while a mouse needs household scraps or smaller, warm-blooded creatures? So do dogs and cats…. not canned food and kibbles. Fish eat worms and many fish eat other fish. Every creature understands their own appetites and needs, through smell, taste and desire. But, this is always according to their body’s ability to digest and assimilate particular foods.

Humans cover the entire range, from grains, fruits, mushrooms and spores, vegetables, meat, fish, birds and fowl. But, most of that requires cooking in order for us to digest such foods. We become attracted to our particular diet and repelled by what we can’t handle, gastronomically. At no point in that basic process do we consider the moral values. Only when we are in no danger of starving, do we have the luxury of weighing the many particulars and leaving perfectly edible food on the plate.

Add to that, dietary requirements and prohibitions of the many religions and cultures, and we can see how luxuriously-complicated our choices can be. And, in this recent time period, we have delicious crops that have been genetically-modified against pests; but we have developed valid concerns about a possible effect on the body. We might be wise to avoid that GMO consumption, but if we’re already avoiding meat on moral grounds, then eventually, what are we to eat?

Oh my Holy Spirit! Is the human being rapidly approaching the same status of a poor pet who is fed with wet food from a can; or dry food from a box, for their entire long life,  between birth and death, so that we might avoid potential land mines waiting in our natural food?

“You have already achieved that status! Think of your frozen dinners and pizzas and every type of reconstituted food that gets popped into a microwave and put on a family table. As well as canned foods and ready-to-eat packaged meals, which make up a large percentage of human consumption these days. Plus, all sugar and carbohydrate snack foods, junk food  and desserts, which children often consider more desirable than real food.

Here is where modern-day concern should be placed! Humans and domesticated animals are living on a steady diet of this expensive, manufactured food and they don’t even think about the ingredients of what they are eating.

Marissa, if you want a real cause to worry about, examine your own diet first and then, the cafeteria of the school where your children eat their lunch…. or the hospital, treating the weakest of people. How many powdered eggs, mashed potatoes, and even dried meats, are they serving daily? It’s a lot like eating artfully-flavored, powdered newspaper!

Truth be told, there are things to worry about concerning foods; but use your good sense and true discernment to figure out which cause to get behind. Have you considered Human Suffering yet? Not only Animal Suffering?

Why not begin with the massive bellies and high-blood-pressure problems that today’s modern diet cultivates? What foods cause that? Why not boycott those? “

Linda is a solo around the world traveler, having slowly explored the world's two hemispheres. A third trip around the equator has just begun, planned to last at least four years. After living for a year in the spiritual and beautiful town of Santa Fe, New Mexico, she has transferred to the beautiful and spiritual town of San Miguel de Allende, Mexico. Feeling honored that the mysterious Hurricane Patricia paid her a call during her first week; she is none-the-less, eternally-grateful that this "worst hurricane in human history" decided to leave the planet alone, after all.
View all posts by Linda J. Brown →
This entry was posted in Questions and Answers and tagged animal slaughter, do animals suffer in slaughter?, do you worry about your food?, dried foods, fake foods, ill health and good food, powdered foods, Vegan's activities, Vegetarian's approach to food. Bookmark the permalink.